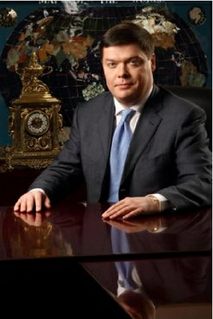 Alexander Yurievich Ryavkin was born on 18 February 1976 in Kamensk-Uralsk city of Sverdlovsk region in a family of doctors. In 1993, he graduated with honors from high school, in 1999 – from Sverdlovsk medical institute, becoming a certified doctor-neurologist. In his youth, he and his twin brother, Sergei successfully played sports and were part of the youth biathlon team of Russia. As a student, Alexander worked in the position of a male nurse in neurosurgery intensive care department of one of the city hospitals.

As a student, he engaged in business, starting to work on the development and practical application of modern medical equipment, including physical therapy equipment, which appeared during these years. In 1996, with a team of associates he has created company Ural medical alliance and in 1998 has become a president of corporation DENAS MS, which has been created jointly with his brother Sergei, who now is the first vice president of Group of Companies DENAS. The corporation under his leadership has begun its own researches, development and production of new highly efficient therapeutic devices.

In November 2008 on the basis of «Civil Power», «Democratic Party of Russia» and «Union of Right-Wing Forces», a new party named «Just Cause» has been created.

He is the author of three books, written in the genre of adventure novel and published by publishing company «Eksmo» in 2011-2012: «Hot Iceberg – 2011», «If you love, then love a queen» and «Desert Paradise or MMM inside out».

Alexander Ryavkin is candidate master in biathlon, likes the modern history of Russia and foreign countries. He is married and has a son.